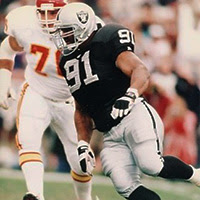 My heart goes out to the family of former L.A. Raider and four-time pro bowl defensive end Chester McGlockton.

I read a news release that said McGlockton had passed early Wednesday morning. The 42-year-old Whiteville, NC native was a defensive assistant at Stanford the last two years.

He was a high school All-American before starring at Clemson for three seasons. He was selected 16th overall in the 1992 NFL draft by the Los Angeles Raiders and would go on to play 12 seasons in the league, making four Pro Bowls and finishing his career with 48.5 sacks. 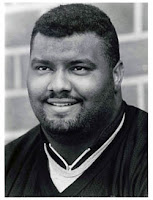 He retired in 2003 after stints with the Denver Broncos, Kansas City Chiefs and New York Jets. In 2010, McGlockton completed his undergraduate degree at Tennessee-Martin. Later that year, he took a coaching job at Stanford.

"The thoughts and prayers of the Raider Nation are with the McGlockton family during this difficult time,'' Raiders CEO Amy Trask said in a statement.

McGlockton is survived by his wife, Zina, and two children.

Posted by Anthony "Thrill" Hill at 1:04 PM No comments: